Last week, I think Arkansas got over 20 inches of snow-no matter what part of the state that you lived in. Snow records were set. Cold temps too. All week long. Never have I looked forward to 32 degrees so much. Texas is still recovering. Hard to believe Austin had six inches of snow.

We made snow ice cream. I tried to make snow decorations but it was just too cold and they busted. Luckily, none of our pipes in the house froze, but there are field lines that will have to be worked on as soon as the ground is unfrozen.

Yesterday, temperatures were in the 50's and yet there is still snow on the ground. Not a lot, but it's still there. Today temperatures are supposed to be in the 60's-and it just feels amazing.

The sun. The clean air. I think I saw some flowers poking up. It won't be long now.

Posted by Older not wiser at 6:18 AM No comments:

I've got you babe

Today I'm working from home. It's nothing unusual to hear a dog whine outside my office door. Usually, I open the door and give them a treat or a quick pat on the head or maybe I have to throw a toy and we're good for another hour or so, but not today. Dixie whined for over two hours and it was driving me batshit crazy. At my lunch, I picked her up and held her and she quieted down-as soon as I put her on the floor she'd start up again. I felt so bad-after all, she just wanted to be held. When my lunch was over, I took her into the office and held her some more. She nestled my neck and was content for quite a while. As things got a little busier, I moved a chair close to me and put her in it. I reach over and scratch her ears as often as I can and she seems content. Sometimes I look over and I see her watching me work. Then, I have to smile and scratch her ears again. I may hold her in my arms, but she holds my heart.

Posted by Older not wiser at 12:23 PM No comments:

So today isn't really an important day to me. Sure there's the ground hog looking for his shadow, but he's only a rodent and his predictions are less than fifty percent accurate. I don't really get excited for Ground Hog day (p.s I hated the movie). My baby sister posted a young picture of my mom-both of my daughters look like her. Beth really looked like this picture of her posted today. I miss my mom. I really do, but she would be gone now. This whole covid thing would have taken her out. Seriously, she would have royally sucked at social distancing. It just wasn't in her dna. Speaking of dna, my other sister posted a picture of her granddaughter due in June. A baby girl is joining our family. I'm so excited. I will officially be a "Great" Aunt. A baby is coming! A baby is coming! Quilts to be made. Dresses to find. Bring on the pink!!!!!!
Posted by Older not wiser at 10:24 AM No comments:

There's an old cartoon about a man deliberately washing all of the laundry on hot so that he tints all the clothes one color, upsets his wife, and gets out of doing laundry forever. I thought about this when Lauren sent Gilmar to the grocery store for some lettus and he came back with a head of cabbage. I'll give him the benefit of a doubt-he was probably in a hurry and they do look a lot alike. Personally, I think cabbage on tacos would be gross so I understood too how she could be upset. Then came the black eye pea incident, you know everyone eats black eye peas on New Year's(for good luck)-so she sent him to the grocery store only to have him return with black beans. This is making me laugh just typing this. Lauren went to the store and indeed they were out of black eyed peas,but she saved the day digging in the back of her pantry-finding some black eyed peas to eat and insure good luck for 2021. Then Gilmar sent her to the store for hamburger buns and I know how badly she wanted to get hot dog buns. I wish she would have asked my advice, but she didn't. I would have told her to get the hot dog buns only if it would make him laugh. Laughter is the best medicine especially if you share it with someone you love. It took me a long time to learn something so simple. I know my husband loves me. I know he does. Does that mean he will leave the toilet seat down in the middle of the night? No, I don't think he will ever master that task. I like to think he tries. So when I'm feeling pissy, I'll remind him that he'll have to help me out of the toilet when I fall in. Same thing about whiskers on the sink. He knows it drives me batshit crazy. He knows it! But every morning, I know exactly how much he's trimmed his beard, but that's ok. Sometimes I cheat and use his razor to shave under my arms. I feel justified in doing so. But we can laugh about it and choose to do so. Relationships are hard. They take work and nourishing. We've been married for 10 years now. Dated for three. We still have a date night. We still go out of our way to cook and do chores for each other. He buys the feed, I feed the horses and chickens. I buy the hay-he makes sure it's stacked and given to the horses on a schedule so they have enough to last all winter. I make sweet tea. He makes lemonaide. it's all in the knowing
Posted by Older not wiser at 11:35 AM No comments:

On my mind, in my heart

Today, I made the decision to call my sister-in-law. It was hard-just voicing the words.: "I'm sorry your mom is gone. She was such a special lady." And wishing with all of my heart that I didn't know what that felt like. Knowing what it feels like, I wish I could take all the pain away and make her laugh remembering good times. The same for my brother and their kids. She will be missed by so many people and she truly was a special lady. Rest in Peace Nana.
Posted by Older not wiser at 11:21 AM No comments:

It's no surprise that prayers have increased since the pandemic has started. No surprise either that my family is mentioned every day. More and more. Why are so many of my loved ones taking care of others? Why couldn't they just be bums? I thought I was scared when my baby caught covid. Realistically, she was better equipped than most people to handle it. She's young, healthy, and very much in the know. She had the oxygen thingy ready and her big brother was close by(he's a nurse too). She came through like a champ. I'm happy about that. Now my youngest nephew appears to have it. He's so young. I can't imagine how worried his mom probably is. And Nana has it too. Prayers for everyone. Every day. Please make it go away and let the healing begin.
Posted by Older not wiser at 8:00 AM No comments:

Today is my last Monday off work for a while. After ten years, I finally have enough seniority to bid Monday through Friday day time hours. I haven't done this in about thirty years so it may take some getting used to. After staying in the house for three days, I knew I would venture out today. I didn't even feel guilty putting the dogs in the basement. I headed out with a cup of coffee a 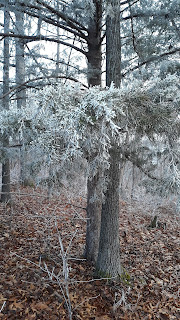 nd a fully charged camera. Drove over Sherman Mountain to Ponca. The elk were too far out. No eagles to be seen, but a beautiful fog made the scenery enjoyable. I took some barn pictures. I'm grateful to live in an area where beauty is all around me. i only took five or six pictures today, but I could have easily doubled that amount. It feels good to breathe deep and just be.
Posted by Older not wiser at 12:37 PM No comments: